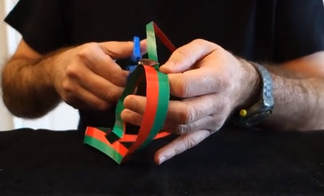 ​For this trick a simple loop of paper is cut with scissors along its  length, but instead of producing two half-width loops of the same diameter as you would expect, you make a single loop- half as wide and twice as long! Cutting other loops leads to even stranger results, like loops that are interlocked and different sizes. What could be happening?

As you cut the Möbius Strip you create a second edge with your scissors- but not two new edges, because remember that this is a Möbius Strip. When you finish the cut the loop now does have two edges and two sides (check it with a marker), but also two full twists. As long as the loop has an odd number of half-twists (1,3,5,etc.) it will be a Möbius Strip, but if it has an even number of half-twists (two half-twists equals a full twist) then it is not a Möbius Strip, it's just a twisted loop. So when you cut a twisted, non-Möbius loop in half, as you did with the second loop that had the full twist, you will finish with two separate loops, but the twists end up locking the loops together. The fourth example, where you cut around a Möbius Strip closer to one "edge" is a bit more difficult to explain, but try to picture in your mind that one side of your cut is producing one new edge on the original loop and the other side of the cut produces two edges of a new loop. Thus the original loop is now twice the original diameter (and no longer a Möbius Strip) but the new loop (which is a Möbius Strip) is the same diameter, and the original twist again locks them together. To try to explain more of what's happening with this strange topological shape (the simplest of what are called manifolds) is well beyond the scope of this simple "magic" trick (as well as my understanding!), but it is fascinating to experiment, so be sure to try cutting different ways in different loops to see what happens.
More Variations:
This one has nothing to do with Möbius Strips, but it's fun: tape two simple, non-Möbius Strip, loops (rotated 90° relative to each other) together, like you might do to make a chain. The loops should actually be fastened to each other however, not just looped or locked together. Now cut through through the center of one of the loops lengthwise, just as you did in the original demonstration. This will actually cut open the second loop as well. Once you finish and unfold the cut loop you should have a straight strip of paper with a thinner loop attached to each end. Now cut the straight strip lengthwise down the center, also cutting open each of the loops on the ends. When you unfold it you will have a perfect square frame! Do exactly the same thing starting with two attached Möbius Strips instead, and the final result will be two locked hearts! [Note that you will need to attached the two Möbius Strips so that their half-twists are in the opposite directions, i.e. one clockwise and the other counterclockwise. Watch the video carefully. What happens if you twist both Möbius Strips in the same direction instead?] All this cutting is amazing enough to fill an entire magic show by itself!
Fun Fact: Did you know that the "twisted arrows" design commonly used to symbolize recycling is actually a Möbius Strip? Look closely- if the arrows are connected they form a loop with one half-twist.